Research at the University of Southern Carolina in the US recently put a group of fit men and women through a series of physical tests to determine if carbohydrate drinks improve performance in team sports situations. 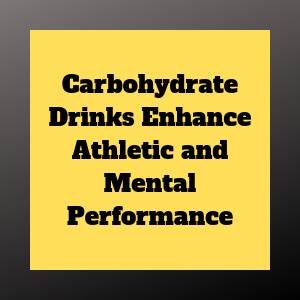 These sports are particularly tough on competitors. They combine endurance with frequent bouts of high intensity activity, and the athletes have to remain mentally alert for long periods.

In this double-blinded crossover study, a group of physically active men and women who played competitive soccer or basketball, completed three practice sessions and two tests that involved a series of high intensity fitness tests.

The fitness tests involved shuttle running, sprinting and jumping drills designed to simulate the demands of an actual competitive sporting event such as basketball. All the participants were tested after taking the placebo and the carbohydrate drink.

In team sports, you have to think quickly and clearly as well as perform athletically. Fatigue not only diminishes athletic performance, it slows cognitive abilities that can lead to mistakes and potential injuries.

This research showed that keeping blood sugar levels steady with the use of sports drinks delayed time to fatigue and enhanced physical and mental function.

After a tough workout most people simply grab a Gatorade-type drink and head for the shower. However, research now shows that people may need more than a sugar-based sports drink to prevent immune system breakdown after intense training.

Carbohydrate Drinks are Not Enough to Prevent Immune System Breakdown

Dr. Alexander Koch from Truman State University recently studied the effects of consuming a carbohydrate sports drink before and after weight training exercise, and found this beverage had no beneficial effect on the immune system.

There is no doubt that high intensity training style is the most efficient method for gains in muscle mass. However, intense training temporarily weakens the immune system. Training too often or not having enough recovery between intense sessions can cause an immune system breakdown. A cold, the flu or more serious illnesses can be the end result.

To help prevent impaired immune function, pay close attention to your post-exercise nutrition. Use supplements that prevent muscle breakdown and boost the immune system at this time, such as Whey Isolate, creatine, L-Glutamine, taurine, vitamins C and E and carbohydrates. If you are unsure of the right nutritional approach that enhances recovery and builds muscle, follow me.