I’ve documented the benefits of strategic carbohydrate for muscle growth and athletic performance previously on this web site.

In this study, muscle biopsies and blood samples were collected from eight subjects that performed several cycling trials. Results revealed that when the participants exercised with full glycogen stores, they worked at high intensities for longer periods before fatigue set in. 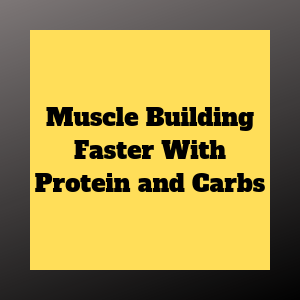 Interesting, when the subjects exercised with low muscle glycogen stores, not only did their cardio work capacity suffer, their creatine phosphate levels and sarcoplasmic reticulum calcium uptake was also reduced.

Fast and effective calcium control in muscle is also a key requirement for high work capacity. Both creatine and calcium control were reduced when the participants exercised with low muscle glycogen stores.

Bodybuilders that restrict there calorie intake through nutrition but still want full muscle fuel stores to power their next workout should follow my program.

A recent study by Alun Williams and colleagues has provided further insights on how to obtain the greatest anabolic response from weight training.

In this study, the acute hormonal responses to different resistance exercise protocols with and without a post-exercise carbohydrate/protein shake were examined.

According to the results published in the European Journal of Applied Physiology, post-exercise carbohydrate/protein supplementation had no effect on lactate, growth hormone, or cortisol responses to resistance exercise.

These mixed results on hormone secretion mean that a true understanding of the impact of anabolic hormones on muscle growth still remains unclear. However, increasing insulin in combination with the increased availability of amino acids after exercise is a key step to triggering a potent anabolic response from training.

After exercise, this response seems to override the action of most other hormones. Consequently, this research showed that when the protein/carb supplement shake is not taken after a workout, this potent anabolic effect in not witnessed.

High insulin levels and a plentiful supply of protein (due to supplementation) promotes tremendous up take by muscle and a powerful growth response. This process seems to be amplified in the hour directly after training, more so than any other time of the day.

The bottom line is, don’t forget to take that Whey Isolate/Creatine shake directly after training. This simple timing effect seems to be all important to obtaining results from your workouts.