One night without sleep is all that’s needed to reduce athletic performance the following day.

Some athletes figure that a little partying the night before, won’t hurt their performance if their event or game isn’t until late in the afternoon the following day. These guys may want to think again.

If you are having trouble losing weight, then you may need to consider your sleep habits as there is a clear link between lack of sleep and (unwanted) weight gain.
Poor sleep habits, or not getting enough sleep, interferes with the regulation of hormones that control appetite.

When you’re awake, the body secretes more of the hormones that stimulate hunger. Researchers at the University of Michigan have revealed that people eat an extra 118 calories for every hour they remain awake. This could easily add up to a pound of body fat over a month.

If you do have trouble losing weight, try to increase the amount of quality sleep you obtain each night. Most athletes undertaking intense training should aim for at least 7 hours of uninterrupted sleep every night.

A recent study published in the European Journal of Physiology has revealed that sleep deprivation didn’t affect performance the following morning, but it did hurt exercise performance that afternoon.

Effects of One Night Without Sleep

The purpose of this study was to determine the effect of one night’s sleep deprivation on cardio performance in the morning and afternoon of the following day. Thirteen healthy males were studied under several conditions, in a balanced, randomized design. The experiment consisted of two conditions 1 week apart. 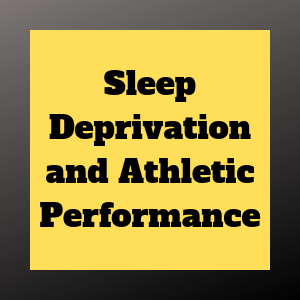 In the sleep deprivation condition, subjects remained awake overnight and were asked to perform an intense exercise test, at either 6AM or 6PM the following day. In the control test the same subjects slept normally at home before the same exercise assessment procedure was carried out.

In both conditions, activity, sleep and diet were monitored with diaries. At each test, the subject’s maximal power, peak power and mean power were assessed during a sprint cycle test.

The scientists concluded that anaerobic power was significantly reduced when the subjects were required to perform exercise in the late afternoon without sleep, as opposed to the same session performed early in the morning after a sleepless night.

I suppose the bottom line here is, if you’re going to have a big night out, make sure you go straight from the night club to your event scheduled early in the morning. However, if your event isn’t until the afternoon, you’ll probably crash and burn.