The results of an interesting study presented recently at the European College of Sports Science’s Annual meeting have shown that the supplementation of protein to a carbohydrate drink provided more efficient rehydration after exercise.

Supplementation of Protein and Carbs

In this study, dehydration was induced in a group of cyclists during exercise and rehydration commenced with either a carbohydrate solution (8%), the addition of a small amount of protein (6 grams) to this solution or water alone. Results showed that the protein-carb combo ensured better rehydration than the carb drink or water alone. 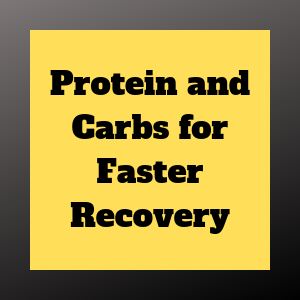 This finding has important implications for all athletes. A small dose of easily absorbed protein such as Whey Isolate to a standard carbohydrate sports drink will not only promote rehydration, it will also stimulate better recovery.

The important role of protein supplementation in promoting muscle mass gains has been highlighted by a recent study.

These findings are incredibly important to bodybuilders. Firstly, the results of this study suggest that the refractory period when muscle protein synthesis can be reignited by feeding is much shorter than previously assumed, particularly when supplements are used. The consumption of protein supplements between regular meals would ensure greater muscle anabolism and growth.

The results of this study suggest that bodybuilders and other athletes can use protein supplements between regular meals to stimulate a higher rate of muscle anabolism that would undoubtedly lead to better gains in muscle mass and strength during training.

Exercising On a Low-Carb Diet is Not Recommended

Now I understand what you’ve said about trying to live, work and train intensely on a low-carb diet. You just can’t do it. However, whenever I’ve started one of these diets, I get an uncanny feeling of euphoria or a natural high. Then of course, after a few weeks my energy levels and workout intensity plummets. I crash and burn. Can you explain this euphoric feeling people can get from those absurd low-carb diets?

The early phase of low-carbohydrate dieting appears to be accompanied by a euphoric feeling or a feeling of well-being. Scientists have linked these sensations to the production of ketones which are chemicals formed by the incomplete breakdown of fats.

However, as you’ve discovered, this high is a short-term thing. To remain productive during the day and also fuel an exercise training program, a certain amount of carbohydrate in the diet is a necessity. The irony is that the strategic selection of the right carbohydrates will make or break your results from training.